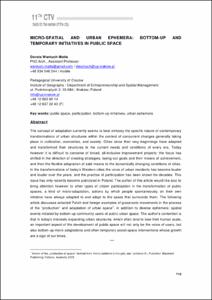 Show full item record
Wantuch-Matla, Dorota
Document typeConference report
PublisherCentre de Política de Sòl i Valoracions
Rights accessOpen Access
Abstract
The concept of adaptation currently seems to best embody the specific nature of contemporary transformations of urban structures within the context of concurrent changes generally taking place in civilization, economics, and society. Cities since their very beginnings have adapted and transformed their structures to the current needs and conditions of every era. Today however it is difficult to conceive of broad, all-inclusive improvement projects: the focus has shifted in the direction of creating strategies, laying out goals and their means of achievement, and then the flexible adaptation of said means to the dynamically changing conditions of cities. In the transformations of today's Western cities the voice of urban residents has become louder and louder over the years, and the practice of participation has been known for decades. This issue has only recently become publicized in Poland. The author of this article would like also to bring attention however to other types of citizen participation in the transformation of public spaces, a kind of micro-adaptation, actions by which people spontaneously on their own initiative have always adapted to and adapt to the space that surrounds them. The following article discusses selected Polish and foreign examples of grassroots movements in the process of the “production” and adaptation of urban space, in addition to diverse ephemera: spatial events initiated by bottom-up community users of public urban space. The author's contention is that in today's intensely expanding urban structures, which often tend to lose their human scale, an important aspect of the development of public space will not only be the voice of users, but also bottom-up micro adaptations and often temporary social-space interventions whose growth are a sign of our times.
CitationWantuch-Matla, Dorota. Micro-spatial and urban ephemera: bottom-up and temporary initiatives in public space. A: Virtual City and Territory. "Back to the Sense of the City: International Monograph Book". Barcelona: Centre de Política de Sòl i Valoracions, 2016, p. 712-722.
URIhttp://hdl.handle.net/2117/90574
DOI10.5821/ctv.8085
ISBN978-84-8157-660-3
Collections
Share: