The inner edge of landscape 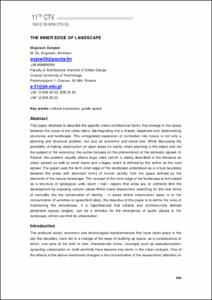 Show full item record
Świątek, Wojciech
Document typeConference report
PublisherCentre de Política de Sòl i Valoracions
Rights accessOpen Access
Abstract
This paper attempts to describe the specific urban-architectural forms that emerge in the space between the traces of the urban fabric, disintegrating into a chaotic, dispersed and deteriorating structures and landscape. The unregulated expansion of civilization into nature is not only a planning and structural problem, but also an economic and social one. While discussing the possibility of halting urbanization on open areas (in reality, when planning is the object and not the subject of the economy), the author focuses on the phenomenon of the domestic sprawl. In Poland, this problem equally affects large cities (which is widely described in the literature as urban sprawl) as well as small towns and villages, which is defined by the author as the rural sprawl. The paper uses the term inner edge of the landscape understood as a virtual boundary between the areas with dominant forms of human activity from the space defined by the elements of the natural landscape. The concept of the inner edge of the landscape is formulated as a structure of typological units (point / trail / region) that allow you to indirectly limit the development by exposing cultural values.While many researchers searching for the new forms of centrality (for the construction of identity - in areas where urbanization steps in or the concentration of activities on greenfield sites), the objective of this paper is to define the rules of maintaining the remoteness. It is hypothesized that urbanly and architecturally defined peripheral spaces (edges), can be a stimulus for the emergence of public places in the landscape, whitch can limit its urbanization.
CitationŚwiątek, Wojciech. The inner edge of landscape. A: Virtual City and Territory. "Back to the Sense of the City: International Monograph Book". Barcelona: Centre de Política de Sòl i Valoracions, 2016, p. 656-669.
URIhttp://hdl.handle.net/2117/90567
DOI10.5821/ctv.8081
ISBN978-84-8157-660-3
Collections
Share: