The difference in lifestyle: "a shopping list" and social engagement as urban process stimulator 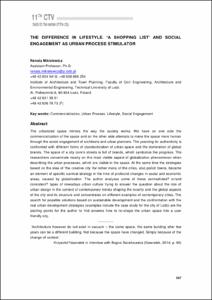 Except where otherwise noted, content on this work is licensed under a Creative Commons license : Attribution-NonCommercial-NoDerivs 3.0 Spain
Abstract
The urbanized space mirrors the way the society works. We have on one side the commercialization of the space and on the other side attempts to make the space more human through the social engagement of architects and urban planners. The yearning for authenticity is confronted with different forms of standardization of urban space and the domination of global brands. The space of a city core’s streets is full of brands, which symbolize the progress. The researchers concentrate mostly on this most visible aspect of globalization phenomenon when describing the urban processes, which are visible in the space. At the same time the strategies based on the idea of ‘the creative city’ for rather many of the cities, also polish towns, became an element of specific survival strategy in the time of profound changes in social and economic areas, caused by globalization. The author analyzes some of these contradicted? or/and consistent? types of nowadays urban culture trying to answer the question about the role of urban design in the context of contemporary trends shaping the locality and the global aspects of the city and its structure and concentrates on different examples of contemporary cities. The search for possible solutions based on sustainable development and the confrontation with the real urban development strategies (examples include the case study for the city of Lodz) are the starting points for the author to find answers how to re-shape the urban space into a user friendly city.
CitationMikielewicz, Renata. The difference in lifestyle: "a shopping list" and social engagement as urban process stimulator. A: Virtual City and Territory. "Back to the Sense of the City: International Monograph Book". Barcelona: Centre de Política de Sòl i Valoracions, 2016, p. 567-576.
URIhttp://hdl.handle.net/2117/90546
DOI10.5821/ctv.8076
ISBN978-84-8157-660-3
Collections
Share: