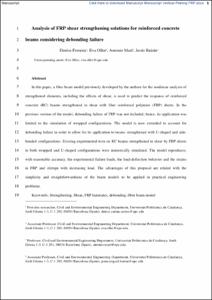 Document typeArticle
Rights accessOpen Access
Abstract
In this paper, a fiber beam model previously developed by the authors for the nonlinear analysis of strengthened elements, including the effects of shear, is used to predict the response of reinforced concrete (RC) beams strengthened in shear with fiber reinforced polymers (FRP) sheets. In the previous version of the model, debonding failure of FRP was not included; hence, its application was limited to the simulation of wrapped configurations. The model is now extended to account for debonding failure in order to allow for its application to beams strengthened with U-shaped and side-bonded configurations. Existing experimental tests on RC beams strengthened in shear by FRP sheets in both wrapped and U-shaped configurations were numerically simulated. The model reproduces, with reasonable accuracy, the experimental failure loads, the load-deflection behavior, and the strains in FRP and stirrups with increasing load. The advantages of this proposal are related with the simplicity and straightforwardness of the beam models to be applied in practical engineering problems.
CitationFerreira, D., Oller, E., Mari, A., Bairan, J.M. Analysis of FRP shear strengthening solutions for reinforced concrete beams considering debonding failure. "Journal of composites for construction", Octubre 2016, vol. 20, núm. 5, p. 04016018-1-04016018-16.
URIhttp://hdl.handle.net/2117/90543
DOI10.1061/(ASCE)CC.1943-5614.0000672
ISSN1090-0268
Publisher versionhttp://ascelibrary.org/doi/10.1061/%28ASCE%29CC.1943-5614.0000672
Collections
Share: