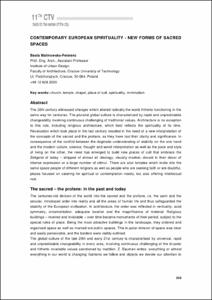 Show full item record
Malinowska-Petelenz, Beata
Document typeConference report
PublisherCentre de Política de Sòl i Valoracions
Rights accessOpen Access
Abstract
The 20th century witnessed changes which altered radically the world hitherto functioning in the same way for centuries. The pluralist global culture is characterized by rapid and unpredictable changeability involving continuous challenging of traditional values. Architecture is no exception to this rule, including religious architecture, which best reflects the spirituality of its time. Revaluation which took place in the last century resulted in the need of a new interpretation of the concepts of the sacred and the profane, as they have lost their clarity and significance. In consequence of the conflict between the dogmatic understanding of stability on the one hand and the modern culture, science, thought and world interpretation as well as the pace and style of living on the other, the need has emerged to build new places of cult that embrace the Zeitgeist of today – stripped of almost all ideology, visually modest, devoid in their décor of intense expression or a large number of stimuli. There are also temples which invite into the same space people of different religions as well as people who are seeking faith or are doubtful, places focused on catering for spiritual or contemplation needs, but also offering intellectual rest.
CitationMalinowska-Petelenz, Beata. Contemporary European spirituality: new forms of sacred spaces. A:Virtual City and Territory. "Back to the Sense of the City: International Monograph Book". Barcelona: Centre de Política de Sòl i Valoracions, 2016, p. 503-516.
URIhttp://hdl.handle.net/2117/90501
DOI10.5821/ctv.8073
ISBN978-84-8157-660-3
Collections
Share: