Where is the library? 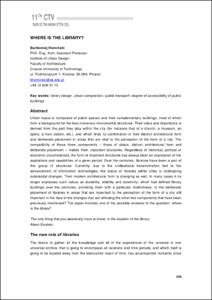 Show full item record
Homiński, Bartłomiej
Document typeConference report
PublisherCentre de Política de Sòl i Valoracions
Rights accessOpen Access
Abstract
Urban tissue is composed of public spaces and their complementary buildings, most of which form a background for the less numerous monumental structures. Their value and importance is derived from the part they play within the city (for instance that of a church, a museum, an opera, a train station, etc.), and which finds its confirmation in their distinct architectural form and deliberate placement in areas that are vital to the perception of the form of a city. The compatibility of these three components – those of status, distinct architectural form and deliberate placement – makes them important structures. Regardless of historical, political or economic circumstances, the form of important structures has always been an expression of the aspirations and capabilities of a given period. Over the centuries, libraries have been a part of this group of structures. Currently, due to the civilisational transformation tied to the advancement of information technologies, the status of libraries within cities is undergoing substantial changes. Their modern architectural form is changing as well. In many cases it no longer expresses such values as durability, stability and solemnity, which had defined library buildings over the centuries, providing them with a particular distinctness. Is the deliberate placement of libraries in areas that are important to the perception of the form of a city still important in the face of the changes that are affecting the other two components that have been previously mentioned? The paper includes one of the possible answers to the question: where is the library?
CitationHomiński, Bartłomiej. Where is the library?. A: Virtual City and Territory. "Back to the Sense of the City: International Monograph Book". Barcelona: Centre de Política de Sòl i Valoracions, 2016, p. 429-438.
URIhttp://hdl.handle.net/2117/90492
DOI10.5821/ctv.8068
ISBN978-84-8157-660-3
Collections
Share: