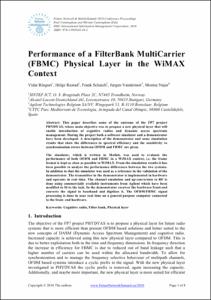 Document typeConference report
Rights accessOpen Access
Abstract
This paper describes some of the outcome of the FP7 project PHYDYAS, whose main objective was to propose a new physical layer that will enable introduction of cognitive radios and dynamic access spectrum management. During the project both a software simulator and a demonstrator have been developed. A description of the demonstrator and some simulation results that show the differences in spectral efficiency and the sensititvity to synchronisation errors between OFDM and FBMC are given. The simulator, which is written in Matlab, was used to evaluate the performance of both OFDM and FBMC in a WiMAX context, i.e. the frame format is kept as close as possible to WiMAX. From the simulation results it has been possible to analyze the performance differences between the two systems. In addition to that the simulator was used as a reference in the validation of the demonstrator. The transmitter in the demonstrator is implemented in hardware and operates in real time. The channel emulation and up-conversion to RF is done using commercially available instruments from Agilent which have been modified to fit to the task. In the demonstrator receiver the hardware front-end converts the signal to baseband and digitizes it. The OFDM/FBMC signal processing is done in near real time on a general purpose computer connected to the front- end hardware.
CitationRingset, V. [et al.]. Performance of a filterBank multiCarrier (FBMC) physical layer in the WiMAX context. A: Future Netwok and Mobile Summit. "Future Netwok and Mobile Summit". Florence: 2010, p. 1-8.
URIhttp://hdl.handle.net/2117/9049
ISBN978-1-905824-18-2
Publisher versionhttp://gps-tsc.upc.es/array/res/img/Image/publicacions/conferences/2010/Ringset_FutureNetworkSummit2010.pdf
Collections
Share: