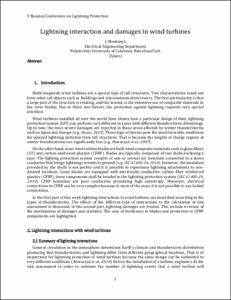 Document typeConference report
Rights accessOpen Access
Abstract
Multi-megawatt wind turbines are a special type of tall structures. Two characteristics stand out from other tall objects such as buildings and telecommunication towers. The first particularity is that a large part of the structure is rotating, and the second, is the extensive use of composite materials in the rotor blades. Due to these two factors, the protection against lightning requests very special attention. Wind turbines installed all over the world have shown how a particular design of their lightning protection system (LPS) can perform very different in areas with different thunderstorm climatology. Up to now, the most severe damages are reported in those areas affected by winter thunderstorms such as Japan and Europe (e.g. Honjo, 2015). These type of storms pose the most favorable conditions for upward lightning initiation from tall structures. That is because the heights of charge regions of winter thunderstorms are significantly low (e.g. Montanyà et al., 2007). On the other hand, most wind turbine blades are built wind composite materials such as glass fibers (GF) and carbon reinforced plastics (CFRP). Blades are typically composed of two shells enclosing a spar. The lighting protection system consists of one or several air terminals connected to a down conductor that brings lightning currents to ground (e.g. IEC 61400-24, 2010). However, the insulation provided by the shells is not perfect and it is possible to experience lightning attachments to non-desired locations. Some blades are equipped with electrically conductive carbon fiber reinforced plastics (CFRP), these components shall be bonded to the lightning protection system (IEC 61400-24, 2010). CFRP laminates are poor conductive presenting high anisotropy. Moreover, electrical connections to CFRP can be very complex because in most of the cases it is not possible to use bolted connections. In the first part of this work lightning interactions to wind turbines are described according to the types of thunderstorms. The effects of the different type of interactions to the calculation of risk assessment is discussed. In the second part, lightning damages are treated. This include a review of the mechanisms of damages and statistics. The case of incidences to blades and protection to CFRP components are highlighted.
CitationMontaña, J. Lightning interaction and damages to wind turbines. A: Russian Conference on Lightning Protection. "V Russian Conference on Lightning Protection: Saint-Petersburg 17-19 May 2016: [proceedings]". Saint Petesburg: 2016.
URIhttp://hdl.handle.net/2117/90434
Collections
Share: