Development of areas of World Exhibitions: search of urbanity: case study of Milan 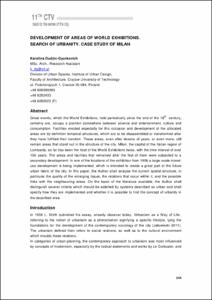 Show full item record
Dudzic-Gyurkovich, Karolina
Document typeConference report
PublisherCentre de Política de Sòl i Valoracions
Rights accessOpen Access
Abstract
Great events, which the World Exhibitions, held periodically since the end of the 18th century, certainly are, occupy a position somewhere between science and entertainment, culture and consumption. Facilities erected especially for this occasion and development of the allocated areas are by definition temporal structures, which are to be disassembled or transformed after they have fulfilled their function. These areas, even after dozens of years, or even more, still remain areas that stand out in the structure of the city. Milan, the capital of the Italian region of Lombardy, so far has been the host of the World Exhibitions twice, with the time interval of over 100 years. The areas and facilities that remained after the first of them were subjected to a secondary development. In one of the locations of the exhibition from 1906 a large-scale mixed-use development is being implemented, which is intended to create a great part of the future urban fabric of the city. In this paper, the Author shall analyse the current spatial structure, in particular the quality of the emerging tissue, the relations that occur within it, and the possible links with the neighbouring areas. On the basis of the literature available, the Author shall distinguish several criteria which should be satisfied by systems described as urban and shall specify how they are implemented and whether it is possible to find the concept of urbanity in the described area.
CitationDudzic-Gyurkovich, Karolina. Development of areas of World Exhibitions: search of urbanity: case study of Milan. A: Virtual City and Territory. "Back to the Sense of the City: International Monograph Book". Barcelona: Centre de Política de Sòl i Valoracions, 2016, p. 344-355.
URIhttp://hdl.handle.net/2117/90418
DOI10.5821/ctv.8064
ISBN978-84-8157-660-3
Collections
Share: