Return to the city 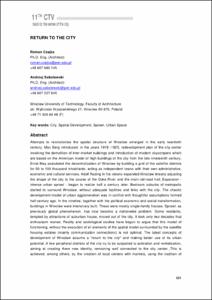 Show full item record
Czajka, Roman
Sobolewski, Andrzej
Document typeConference report
PublisherCentre de Política de Sòl i Valoracions
Rights accessOpen Access
Abstract
Attempts to revolutionize the spatial structure of Wroclaw emerged in the early twentieth century. Max Berg introduced, in the years 1919 -1925, redevelopment plan of the city center involving the demolition of inter-market buildings and introduction of modern skyscrapers which are based on the American model of high buildings of the city from the late nineteenth century. Ernst May postulated the decentralization of Wroclaw by building a grid of the satellite districts for 50 to 100 thousand inhabitants, acting as independent towns with their own administrative, economic and cultural services. Adolf Rading in his visions expanded Wroclaw linearly adjusting the shape of the city to the course of the Odra River and the main rail-road trail. Expansion - intense urban sprawl - began to realize half a century later. Bedroom suburbs of metropolis started to surround Wroclaw, without adequate facilities and links with the city. The chaotic development model of urban agglomeration was in conflict with thoughtful assumptions formed half-century ago. In the nineties, together with the political economic and social transformation, buildings in Wroclaw were intensively built. These were mostly single-family houses. Sprawl, as previously global phenomenon, has now become a nationwide problem. Some residents, tempted by attractions of suburban house, moved out of the city. It took only two decades that enthusiasm waned. Reality and sociological studies have begun to argue that this model of functioning, without the execution of all elements of the spatial model surrounded by the satellite housing estates (mainly communication connections) is not optimal. The latest concepts of development of Wroclaw assume a "return to the city" and making better use of its urban potential. A few peripheral districts of the city try to be subjected to activation and revitalization, aiming at creating there new identity, remaining well connected to the city center. This is achieved, among others, by the creation of local centers with markets, using the tradition of places. These are mainly: Psie Pole, Leœnica and Brochów. An interesting experience also seems to be the implementation of the new WUWA on Zerniki. The analysis of the indicated cases can formulate initial conclusions concerning the reasonableness and attractiveness of "back to the city".
CitationCzajka, Roman; Sobolewski, Andrzej. Return to the city. A: Virtual City and Territory. "Back to the Sense of the City: International Monograph Book". Barcelona: Centre de Política de Sòl i Valoracions, 2016, p. 321-331.
URIhttp://hdl.handle.net/2117/90416
DOI10.5821/ctv.8062
ISBN978-84-8157-660-3
Collections
Share: