Architecture of culture as a way to the revitalisation of cities of today: what can we learn from the Polish and Spanish experience? 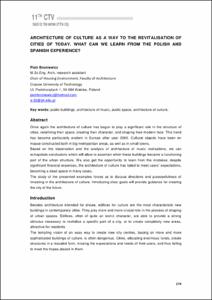 Except where otherwise noted, content on this work is licensed under a Creative Commons license : Attribution-NonCommercial-NoDerivs 3.0 Spain
Abstract
Once again the architecture of culture has begun to play a significant role in the structure of cities, redefining their space, creating their character, and shaping their modern face. This trend has become particularly evident in Europe after year 2000. Cultural objects have been en masse constructed both in big metropolitan areas, as well as in small towns. Based on the observation and the analysis of architecture of music realisations, we can extrapolate conclusions which will allow to ascertain when these buildings became a functioning part of the urban structure. We also get the opportunity to learn from the mistakes: despite significant financial expenses, the architecture of culture has failed to meet users’ expectations, becoming a dead space in many cases. The study of the presented examples forces us to discuss directions and purposefulness of investing in the architecture of culture. Introducing clear goals will provide guidance for creating the city of the future.
CitationBroniewicz, Piotr. Architecture of culture as a way to the revitalisation of cities of today: what can we learn from the Polish and Spanish experience?. A: Virtual City and Territory. "Back to the Sense of the City: International Monograph Book". Barcelona: Centre de Política de Sòl i Valoracions, 2016, p. 274-284.
URIhttp://hdl.handle.net/2117/90415
DOI10.5821/ctv.8061
ISBN978-84-8157-660-3
Collections
Share: