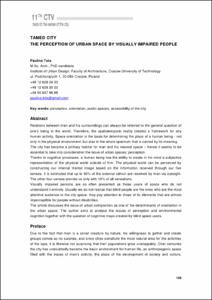 Show full item record
Tota, Paulina
Document typeConference report
PublisherCentre de Política de Sòl i Valoracions
Rights accessOpen Access
Abstract
Relations between man and his surroundings can always be referred to the general question of one’s being in the world. Therefore, the spatiotemporal reality creates a framework for any human activity. Space orientation is the basis for determining the place of a human being - not only in the physical environment, but also in the whole spectrum that is carried by its meaning. The city has become a primary habitat for man and his nearest space – hence it seems to be essential to take into consideration the issue of urban spaces; perception. Thanks to cognitive processes, a human being has the ability to create in his mind a subjective representation of the physical world outside of him. The physical world can be perceived by constructing our internal mental image based on the information received through our five senses. It is estimated that up to 90% of the external stimuli are received by man via eyesight. The other four senses provide us only with 10% of all sensations. Visually impaired persons are so often presented as those users of space who do not understand it entirely. Usually we do not realise that blind people are the ones who are the most attentive audience to the city space: they pay attention to those of its elements that are almost imperceptible for people without disabilities. The article discusses the issue of urban composition as one of the determinants of orientation in the urban space. The author aims to analyse the issues of perception and environmental cognition together with the question of cognitive maps created by blind space users.
CitationTota, Paulina. Tamed city: the perception of urban space by visually impaired people. A: Virtual City and Territory. "Back to the Sense of the City: International Monograph Book". Barcelona: Centre de Política de Sòl i Valoracions, 2016, p. 189-198.
URIhttp://hdl.handle.net/2117/90410
DOI10.5821/ctv.8057
ISBN978-84-8157-660-3
Collections
Share: