Between virtuality and reality: remarks about perception of city architecture 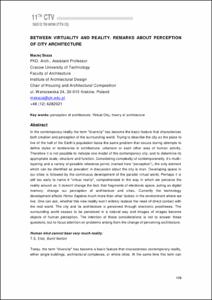 Show full item record
Skaza, Maciej
Document typeConference report
PublisherCentre de Política de Sòl i Valoracions
Rights accessOpen Access
Abstract
In the contemporary reality the term "diversity" has become the basic feature that characterizes both creation and perception of the surrounding world. Trying to describe the city as the place to live of the half of the Earth's population faces the same problem that occurs during attempts to define styles or tendencies in architecture, urbanism or each other area of human activity. Therefore it is not possible to indicate one model of the contemporary city, and to determine its appropriate scale, structure and function. Considering complexity of contemporaneity, it’s multi–layering and a variety of possible reference points (named here "perception"), the only element which can be identified as prevalent in discussion about the city is man. Developing space in our cities is followed by the continuous development of the parallel virtual world. Perhaps it is still too early to name it "virtual reality", comprehended in the way in which we perceive the reality around us. It doesn’t change the fact, that fragments of electronic space, acting as digital memory, change our perception of architecture and cities. Currently the technology development affects Homo Sapiens much more than other factors in the environment where we live. One can ask, whether this new reality won’t entirely replace the need of direct contact with the real world. The city and its architecture is perceived through electronic prostheses. The surrounding world ceases to be perceived in a natural way and images of images become objects of human perception. The intention of these considerations is not to answer these questions, but to focus attention on problems arising from the change of perceiving architecture.
CitationSkaza, Maciej. Between virtuality and reality: remarks about perception of city architecture. A: Virtual City and Territory. "Back to the Sense of the City: International Monograph Book". Barcelona: Centre de Política de Sòl i Valoracions, 2016, p. 173-179.
URIhttp://hdl.handle.net/2117/90407
DOI10.5821/ctv.8055
ISBN978-84-8157-660-3
Collections
Share: