Island cities: a restriction or an opportunity? 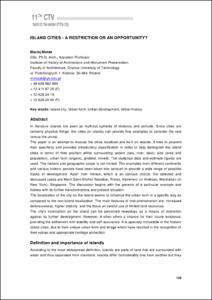 Except where otherwise noted, content on this work is licensed under a Creative Commons license : Attribution-NonCommercial-NoDerivs 3.0 Spain
Abstract
In literature islands are seen as mythical symbols of distance and solitude. Since cities are certainly physical things, the cities on islands can provide fine examples to consider the real versus the unreal. The paper is an attempt to discuss the cities localized and built on islands. It tries to pinpoint their specificity and provides introductory classification in order to help distinguish the island cities in terms of their position within surrounding waters (sea, river, lake); size (area and population), urban form (organic, gridded, mixed). The statistical data and estimate figures are used. The historic and geographic scope is not limited. The examples from different continents and various historic periods have been taken into account to provide a wide range of possible tracks of development. Apart from Venice, which is an obvious choice, the selected and discussed cases are Mont Saint-Michel, Nesebar, Flores, Kazimierz (in Krakow), Manhattan (in New York), Singapore. The discussion begins with the genesis of a particular example and follows with its further transformations and present situation. The localization of the city on the island seems to influence the urban form in a specific way as compared to the non-island localization. The main features of that phenomenon are: increased defensiveness, higher stability, and the focus on careful use of limited land resources. The city’s localization on the island can be perceived nowadays as a means of restriction against its further development. However, it often offers a chance for their future existence, providing the settlement with stability and self-assurance. It is specially noticeable in the historic island cities, due to their unique urban form and image which have resulted in the recognition of their values and appropriate heritage protection.
CitationMotak, Maciej. Island cities: a restriction or an opportunity?. A: Virtual City and Territory. "Back to the Sense of the City: International Monograph Book". Barcelona: Centre de Política de Sòl i Valoracions, 2016, p. 129-143.
URIhttp://hdl.handle.net/2117/90401
DOI10.5821/ctv.8052
ISBN978-84-8157-660-3
Collections
Share: