Barcelona and Milan: two cities one architecture: typological similarities in residential architecture from the 1950’s - 60’s 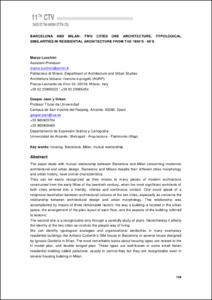 Show full item record
Lucchini, Marco
Jaen y Urban, Gaspar
Document typeConference report
PublisherCentre de Política de Sòl i Valoracions
Rights accessOpen Access
Abstract
The paper deals with mutual relationship between Barcelona and Milan concerning modernist architectural and urban design. Barcelona and Milano despite their different cities morphology and urban history, have similar characteristics. They can be easily recognized as they relates to many pieces of modern architecture constructed from the early fifties of the twentieth century, when the most significant architects of both cities entered into a friendly, intense and continuous contact. One could speak of a reciprocal fascination between architectural cultures of the two cities, especially as concerns the relationship between architectural design and urban morphology. This relationship was accomplished by means of three remarkable factors: the way a building is located in the urban space, the arrangement of the plan layout of each floor, and the aspects of the building referred to tectonic. The second one is a recognizable only through a carefully study of plans. Nevertheless it affects the identity of the two cities as involves the people way of living. We can identifiy typological analogies and organisational similarities in many exemplary residential buildings like Antonio Coderch’s ISM house in Barcelona or several house designed by Ignazio Gardella in Milan. The most remarkable topics about housing types are related to the H model plan, and double winged plan. These types are well-known in some small Italian residential building called palazzine, usually in central Italy but they are recognizable even in several housing building in Milan.
CitationLucchini, Marco; Jaen y Urban, Gaspar. Barcelona and Milan: two cities one architecture: typological similarities in residential architecture from the 1950’s - 60’s. A: Virtual City and Territory. "Back to the Sense of the City: International Monograph Book". Barcelona: Centre de Política de Sòl i Valoracions, 2016, p. 106-116.
URIhttp://hdl.handle.net/2117/90395
DOI10.5821/ctv.8050
ISBN978-84-8157-660-3
Collections
Share: