Longing for the main street 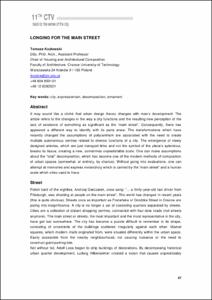 It may sound like a cliché that urban design theory changes with man’s development. The article refers to the changes in the way a city functions and the resulting new perception of the lack of existence of something as significant as the “main street”. Consequently, there has appeared a different way to identify with its parts anew. The transformations which have recently changed the assumptions of polycentrism are associated with the need to create multiple autonomous centres related to diverse functions of a city. The emergence of newly designed arteries, which are just transport links and not the symbol of the place’s splendour, breaks its tissue, creating a new, sometimes unpredictable scale. One can make assumptions about the “total” decomposition, which has become one of the modern methods of composition of urban spaces (somewhat, or entirely, by chance). Without going into evaluations, one can attempt at memories and express melancholy which is carried by the “main street” and a human scale which cities used to have.
CitationKozłowski, Tomasz. Longing for the main street. A: Virtual City and Territory. "Back to the Sense of the City: International Monograph Book". Barcelona: Centre de Política de Sòl i Valoracions, 2016, p. 97-105.
URIhttp://hdl.handle.net/2117/90390
ISBN978-84-8157-660-3