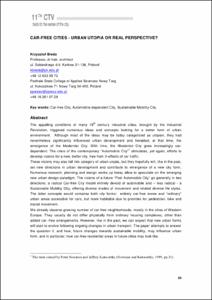 The appalling conditions of many 19th century industrial cities, brought by the Industrial Revolution, triggered numerous ideas and concepts looking for a better form of urban environment. Although most of the ideas may be today categorized as utopian, they had nevertheless significantly influenced urban development and heralded, at that time, the emergence of the Modernist City. With time, the Modernist City grew increasingly car-dependent. The crisis of the contemporary “Automobile City” stimulates, yet again, efforts to develop visions for a new, better city, free from ill-effects of car traffic. These visions may also fall into category of urban utopia, but they hopefully will, like in the past, set new directions in urban development and contribute to emergence of a new city form. Numerous research, planning and design works up today allow to speculate on the emerging new urban design paradigm. The visions of a future “Post Automobile City” go generally in two directions: a radical Car-free City model entirely devoid of automobile and – less radical - a Sustainable Mobility City, offering diverse modes of movement and related diverse life styles. The latter concepts would comprise both city forms: entirely car-free zones and “ordinary” urban areas accessible for cars, but more habitable due to priorities for pedestrian, bike and transit movement. We already observe growing number of car-free neighborhoods, mostly in the cities of Western Europe. They usually do not differ physically from ordinary housing complexes, other than added car- free arrangements. However, like in the past, we can expect that new urban forms will start to evolve following ongoing changes in urban transport. The paper attempts to answer the question if, and how, future changes towards sustainable mobility, may influence urban form, and in particular, how car-free residential areas in future cities may look like.
CitationBieda, Krzysztof. Car-free cities: urban utopia or real perspective?. A: Virtual City and Territory. "Back to the Sense of the City: International Monograph Book". Barcelona: Centre de Política de Sòl i Valoracions, 2016, p. 50-61.
URIhttp://hdl.handle.net/2117/90354
ISBN978-84-8157-660-3