Injury pattern in lethal motorbikes-pedestrian collisions, in the area of Barcelona, Spain 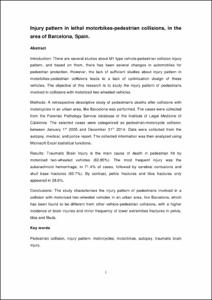 Galtés Vicente, Ignasi
Document typeArticle
Rights accessOpen Access
Abstract
Introduction: There are several studies about M1 type vehicle-pedestrian collision injury pattern, and based on them, there has been several changes in automobiles for pedestrian protection. However, the lack of sufficient studies about injury pattern in motorbikes-pedestrian collisions leads to a lack of optimization design of these vehicles. The objective of this research is to study the injury pattern of pedestrians involved in collisions with motorized two-wheeled vehicles. Methods: A retrospective descriptive study of pedestrian’s deaths after collisions with motorcycles in an urban area, like Barcelona was performed. The cases were collected from the Forensic Pathology Service database of the Institute of Legal Medicine of Catalonia. The selected cases were categorized as pedestrian-motorcycle collision, between January 1st 2006 and December 31th 2014. Data were collected from the autopsy, medical, and police report. The collected information was then analyzed using Microsoft Excel statistical functions. Results: Traumatic Brain Injury is the main cause of death in pedestrian hit by motorized two-wheeled vehicles (62.85%). The most frequent injury was the subarachnoid hemorrhage, in 71.4% of cases, followed by cerebral contusions and skull base fractures (65.7%). By contrast, pelvic fractures and tibia fractures only appeared in 28.6%. Conclusions: The study characterizes the injury pattern of pedestrians involved in a collision with motorized two-wheeled vehicles in an urban area, like Barcelona, which has been found to be different from other vehicle-pedestrian collisions, with a higher incidence of brain injuries and minor frequency of lower extremities fractures in pelvis, tibia and fibula.
CitationRebollo-Soria, M., Arregui-Dalmases, C., Sanchez, D., Velazquez-Ameijide, J., Galtés, I. Injury pattern in lethal motorbikes-pedestrian collisions, in the area of Barcelona, Spain. "Journal of Forensic and Legal Medicine", 3 Agost 2016, vol. 43, p. 80-84.
URIhttp://hdl.handle.net/2117/90351
DOI10.1016/j.jflm.2016.07.009
ISSN1752-928X
Publisher versionhttp://www.jflmjournal.org/article/S1752-928X(16)30077-4/abstract
Collections
Share: