Cohesive surface model for fracture based on a two-scale formulation: computational implementation aspects 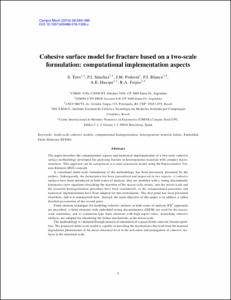 Feijóo, R.A.
Document typeArticle
Rights accessOpen Access
All rights reserved. This work is protected by the corresponding intellectual and industrial property rights. Without prejudice to any existing legal exemptions, reproduction, distribution, public communication or transformation of this work are prohibited without permission of the copyright holder
ProjectCOMP-DES-MAT - Advanced tools for computational design of engineering materials (EC-FP7-320815)
Abstract
The paper describes the computational aspects and numerical implementation of a two-scale cohesive surface methodology developed for analyzing fracture in heterogeneous materials with complex micro-structures. This approach can be categorized as a semi-concurrent model using the representative volume element concept. A variational multi-scale formulation of the methodology has been previously presented by the authors. Subsequently, the formulation has been generalized and improved in two aspects: (i) cohesive surfaces have been introduced at both scales of analysis, they are modeled with a strong discontinuity kinematics (new equations describing the insertion of the macro-scale strains, into the micro-scale and the posterior homogenization procedure have been considered); (ii) the computational procedure and numerical implementation have been adapted for this formulation. The first point has been presented elsewhere, and it is summarized here. Instead, the main objective of this paper is to address a rather detailed presentation of the second point. Finite element techniques for modeling cohesive surfaces at both scales of analysis (FE2 approach) are described: (i) finite elements with embedded strong discontinuities are used for the macro-scale simulation, and (ii) continuum-type finite elements with high aspect ratios, mimicking cohesive surfaces, are adopted for simulating the failure mechanisms at the micro-scale. The methodology is validated through numerical simulation of a quasi-brittle concrete fracture problem. The proposed multi-scale model is capable of unveiling the mechanisms that lead from the material degradation phenomenon at the meso-structural level to the activation and propagation of cohesive surfaces at the structural scale.
Description
The final publication is available at Springer via http://dx.doi.org/10.1007/s00466-016-1306-y
CitationToro, S., Sánchez, P., Podestá, J., Blanco, P., Huespe, A., Feijóo, R. Cohesive surface model for fracture based on a two-scale formulation: computational implementation aspects. "Computational mechanics", Octubre 2016, vol. 58, núm. 4, p. 549-585.
URIhttp://hdl.handle.net/2117/90339
DOI10.1007/s00466-016-1306-y
ISSN0178-7675
Publisher versionhttp://link.springer.com/article/10.1007/s00466-016-1306-y
Collections
Share: