Cross-Layer radio resource allocation: the journey so far and the road ahead 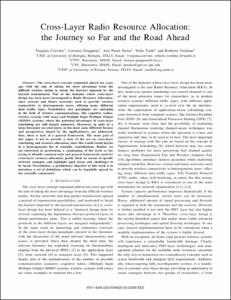 Verdone, Roberto
Tralli, Velio
Document typeConference report
Rights accessOpen Access
Abstract
The cross-layer concept originated almost ten years ago with the aim of taking the most advantage from the difficult wireless media to break the barriers imposed by the layered transmission. One of the domains where cross-layer design has been more investigated is Radio Resource Allocation, since current and future networks need to provide wireless connectivity to heterogeneous users, offering many different data traffic types. Nonetheless, new paradigms are emerging in the field of wireless communications, like cognitive radios, wireless systems with relays and Multiple Input Multiple Output (MIMO) systems, where the potential advantages of cross-layer scheduling are still largely unknown. Moreover, in spite of a large literature on cross-layer, in the most cases different focuses and perspectives, biased by the application(s), are addressed, thus, there is lack of a general framework. The main goal of this paper is not to provide a state of the art on cross-layer scheduling and resource allocation, since this would result maybe in a heterogeneous list of scientific contributions. Rather, we are interested in performing a cataloguing of the work so far, trying to identify common tools and general frameworks used for cross-layer resource allocation, justify them by means of specific network examples and highlight open issues and challenges to be faced. Nevertheless, a preliminary objective of this work is to introduce a set of definitions which can be hopefully agreed by the scientific community.
CitationCorvino, V. [et al.]. Cross-Layer radio resource allocation: the journey so far and the road ahead. A: International Workshop on Cross-Layer Design. "International Workshop on Cross-Layer Design". Palma de Mallorca: 2009.
URIhttp://hdl.handle.net/2117/9032
Collections
Share: