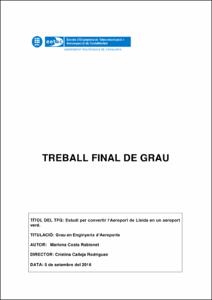 gmail.com
Tutor / directorCalleja Rodriguez, Cristina
Document typeBachelor thesis
Rights accessOpen Access
Abstract
The air transport is an essential factor for the modernization and development in the new global context. Therefore, in the recent years, commercial aviation has experimented a great expansion. Increasingly, people use air transport to move from one place to another. This expansion has been very beneficial for the development of the aviation sector. But there are also appeared a number of problems, especially related with the environment. These problems have forced several countries to reach agreements to provide solutions and cooperate with the aim of reducing the impact of their own activities. In the case of airports, must deal with the increase in CO2 emissions, noise emissions, the large consumption of electricity, water consumption, etc. To this end in 2009, the ACI Europe created the Airport Carbon Accreditation Program (ACA) to help evaluate and recognize the efforts made by airports in order to manage and reduce their CO2 emissions. In addition, in 2010, Aena and Ministerio de Fomento, launched the project Aeropuerto Verde. This project specifies the most important areas to reduce energy consumption and emissions produced by airport activities. In this project, we seek measures that could be incorporated into the facilities of the Lleida-Alguaire airport. To doing so, has taken into account the objectives and actions proposed in the Aena's project Aeropuerto Verde. Firstly, a study to identify the measures applied to reduce power consumption on various Spanish and European airports participating in the program ACA is done. In the next part of this project, has carried out a study of the actual state of the Lleida-Alguaire Airport. Once the situation is known, a study of different proposals to reduce CO2 and electricity consumption is made. And finally, the viability of the various proposals on Lleida-Alguaire airport has been tested.
SubjectsAirports--Environmental aspects, Aeroports -- Lleida (Catalunya)
DegreeGRAU EN ENGINYERIA D'AEROPORTS (Pla 2010)
URIhttp://hdl.handle.net/2117/90305
Collections
Share: