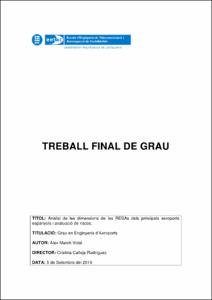 Show full item record
March Vidal, Alex
Tutor / directorCalleja Rodriguez, Cristina
Document typeBachelor thesis
Rights accessOpen Access
Abstract
Most aviation accidents and incidents occur during take-off and landing phases. Some of these accidents consist of exceeding the end of the runway taking-off and landing, or landing the aircraft before reaching the beginning of the runway, thus the aircraft could make an impact with soil. For this reason, ICAO has established it as mandatory to have a safety area at the end of the runway called RESA. The dimensions of RESAs are estimated by ICAO. However, the values are general and may vary according to each airport. This is why this project focuses on the analysis of those security zones based on the data of past events. This database consists of accidents that have occurred in Spain and England, because Spain's sample of accidents was not enough. To accomplish that study, some probabilistic methods were used to determine the probability of occurrence of accidents and the probability of exceeding a certain distance from the edge of the track. The methods used consist respectively of a multinominal logistic regression and a Beta distribution. Resulting in a value, for each runway, of the probability of exceeding the existing RESA. Finally, there is an evaluation of the security zones situated in the end of the track, of the different runways of the various airports displayed in this study. This assessment is made referring the values proposed by EASA, to ensure safety. The results have been divided into two caseloads. Firstly, in most cases, the risk of exceeding this area is low and therefore any appliance of corrective measures is not necessary. What is more, in certain runways of certain airports of the study, there is a medium risk of exceeding the RESA size. In these cases, there are proposed measures for reducing the risks and for raising the level of security to the value of the previous cases.
SubjectsAirports--Security measures--Spain, Aeroports -- Espanya
DegreeGRAU EN ENGINYERIA D'AEROPORTS (Pla 2010)
URIhttp://hdl.handle.net/2117/90304
Collections
Share: