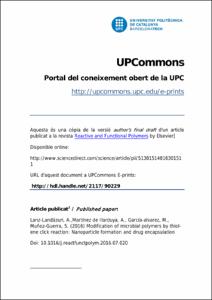 Document typeArticle
Rights accessOpen Access
Abstract
Comb-like amphiphilic polymers were obtained by grafting long paraffinic chains on microbial poly(¿,dl-glutamic acid) and poly(ß,l-malic acid) through two steps, i.e. allylation of the carboxylic side groups followed by UV-initiated thiol-ene click reaction with 1-alkanethiols bearing 8, 12 and 16 carbon atoms, and their characterization was accomplished by 1H NMR, GPC and DSC. The grafted polymers were capable of self-assembling in nanoparticles with diameters in the 80–240 nm range. Incubation in water under physiological conditions led to hydrolysis of the lateral ester bonds followed by scission of the polyamide or polyester main chain. The model drugs, Theophylline and Carbamazepine, were efficiently encapsulated in these systems with much better results attained for the later. Drug release from nanoparticles incubated under physiological conditions occurred with a burst effect and were completely discharged in 24 h. Release profiles recorded from drug-loaded films suggested that the drug was delivered in both cases through a diffusion process.
CitationLanz, A., Martinez de Ilarduya, A., Garcia, M., Muñoz, S. Modification of microbial polymers by thiol-ene click reaction: Nanoparticle formation and drug encapsulation. "Reactive and functional polymers", 1 Setembre 2016, vol. 106, p. 143-152.
URIhttp://hdl.handle.net/2117/90229
DOI10.1016/j.reactfunctpolym.2016.07.020
ISSN1381-5148
Publisher versionhttp://www.sciencedirect.com/science/article/pii/S1381514816301511
Collections
Share: