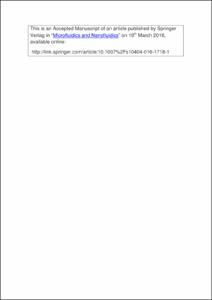 Document typeArticle
Rights accessOpen Access
Abstract
This work describes the steady-state transport of an electrolyte due to a stationary concentration difference in straight long channels under conditions of electroosmotic circulation. The electroosmotic flow is induced due to the slip produced at the charged channel walls. This flow is assumed to be compensated by a pressure-driven counterflow so that the net volume flow through the channel is exactly zero. Owing to the concentration dependence of electroosmotic slip, there is an involved coupling between the solute transfer, hydrodynamic flow and charge conservation. Nevertheless, for such a system the Taylor–Aris dispersion (TAD) theory is shown to be approximately applicable locally within an inner part of the channel for a wide range of Péclet numbers (Pe) irrespective of the concentration difference. Numerical simulations reveal only small deviations from analytical solutions for the inner part of the channel. The breakdown of TAD theory occurs within boundary regions near the channel ends and is related to the variation of the dispersion mechanism from the purely molecular diffusion at the channel ends to the hydrodynamic dispersion within the inner part of the channel. This boundary region is larger at the lower-concentration channel edge and its size increases nearly linearly with Pe number. It is possible to derive a simple analytical approximation for the inner profile of cross-section-averaged electrolyte concentration in terms of only few parameters, determined numerically. Such analytical approximations can be useful for experimental studies of concentration polarization phenomena in long microchannels.
CitationLicon , E., Kovalchuk, V., Zholkovskij, E., Yaroshchuk, A. Hydrodynamic dispersion in long microchannels under conditions of electroosmotic circulation: II. Electrolytes. "Microfluidics and nanofluidics", 19 Març 2016, vol. 20, núm. 4, p. 1-58.
URIhttp://hdl.handle.net/2117/90183
DOI10.1007/s10404-016-1718-1
ISSN1613-4982
Publisher versionhttp://link.springer.com/article/10.1007%2Fs10404-016-1718-1
Collections
Share: