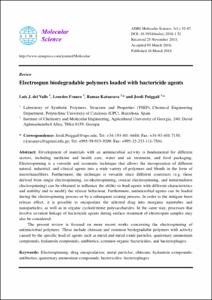 Document typeArticle
PublisherAMER INST MATHEMATICAL SCIENCES-AIMS
Rights accessOpen Access
Abstract
Development of materials with an antimicrobial activity is fundamental for different sectors, including medicine and health care, water and air treatment, and food packaging. Electrospinning is a versatile and economic technique that allows the incorporation of different natural, industrial, and clinical agents into a wide variety of polymers and blends in the form of micro/nanofibers. Furthermore, the technique is versatile since different constructs (e.g. those derived from single electrospinning, co-electrospinning, coaxial electrospinning, and miniemulsion electrospinning) can be obtained to influence the ability to load agents with different characteristics and stability and to modify the release behaviour. Furthermore, antimicrobial agents can be loaded during the electrospinning process or by a subsequent coating process. In order to the mitigate burst release effect, it is possible to encapsulate the selected drug into inorganic nanotubes and nanoparticles, as well as in organic cyclodextrine polysaccharides. In the same way, processes that involve covalent linkage of bactericide agents during surface treatment of electrospun samples may also be considered.; The present review is focused on more recent works concerning the electrospinning of antimicrobial polymers. These include chitosan and common biodegradable polymers with activity caused by the specific load of agents such as metal and metal oxide particles, quaternary ammonium compounds, hydantoin compounds, antibiotics, common organic bactericides, and bacteriophages.
Citationdel Valle, LJ., Franco, M., Katsarava, R., Puiggali, J. Electrospun biodegradable polymers loaded with bactericide agents. "AIMS MOLECULAR SCIENCE", 1 Gener 2016, vol. 3, núm. 1, p. 52-87.
URIhttp://hdl.handle.net/2117/90182
DOI10.3934/molsci.2016.1.52
ISSN2372-0301
Publisher versionhttp://www.aimspress.com/article/10.3934/molsci.2016.1.52
Collections
Share: