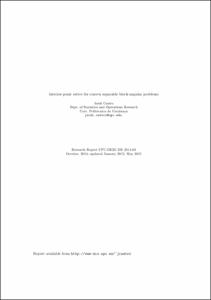 Document typeArticle
Rights accessOpen Access
Abstract
Constraints matrices with block-angular structures are pervasive in optimization. Interior-point methods have shown to be competitive for these structured problems by exploiting the linear algebra. One of these approaches solves the normal equations using sparse Cholesky factorizations for the block constraints, and a reconditioned conjugate gradient (PCG) for the linking constraints. The preconditioner is based on a power series expansion which approximates the inverse of the matrix of the linking constraints system. In this work, we present an efficient solver based on this algorithm. Some of its features are as follows: it solves linearly constrained convex separable problems (linear, quadratic or nonlinear); both Newton and second-order predictor–corrector directions can be used, either with the Cholesky+PCG scheme or with a Cholesky factorization of normal equations; the preconditioner may include any number of terms of the power series; for any number of these terms, it estimates the spectral radius of the matrix in the power series (which is instrumental for the quality of the preconditioner). The solver has been hooked to the structure-conveying modelling language (SML) based on the popular AMPL modeling language. Computational results are reported for some large and/or difficult instances in the literature: (1) multicommodity flow problems; (2) minimum congestion problems; (3) statistical data protection problems using and distances (which are linear and quadratic problems, respectively), and the pseudo-Huber function, a nonlinear approximation to which improves the preconditioner. In the largest instances, of up to 25 millions of variables and 300,000 constraints, this approach is from 2 to 3 orders of magnitude faster than state-of-the-art linear and quadratic optimization solvers.
CitationCastro, J. Interior-point solver for convex separable block-angular problems. "Optimization methods software", Gener 2016, vol. 31, núm. 1, p. 88-109.
URIhttp://hdl.handle.net/2117/90150
DOI10.1080/10556788.2015.1050014
ISSN1055-6788
Publisher versionhttp://www.tandfonline.com/doi/full/10.1080/10556788.2015.1050014
Collections
Share: