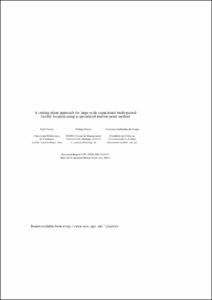 Nasini, Stefano
Saldanha da Gama, Francisco
Document typeArticle
Rights accessOpen Access
Abstract
We propose a cutting-plane approach (namely, Benders decomposition) for a class of capacitated multi-period facility location problems. The novelty of this approach lies on the use of a specialized interior-point method for solving the Benders subproblems. The primal block-angular structure of the resulting linear optimization problems is exploited by the interior-point method, allowing the (either exact or inexact) efficient solution of large instances. The consequences of different modeling conditions and problem specifications on the computational performance are also investigated both theoretically and empirically, providing a deeper understanding of the significant factors influencing the overall efficiency of the cutting-plane method. The methodology proposed allowed the solution of instances of up to 200 potential locations, one million customers and three periods, resulting in mixed integer linear optimization problems of up to 600 binary and 600 millions of continuous variables. Those problems were solved by the specialized approach in less than one hour and a half, outperforming other state-of-the-art methods, which exhausted the (144 Gigabytes of) available memory in the largest instances.
CitationCastro, J., Nasini, S., Saldanha da Gama, F. A cutting-plane approach for large-scale capacitated multi-period facility location using a specialized interior-point method. "Mathematical programming", 19 Setembre 2016.
URIhttp://hdl.handle.net/2117/90149
DOI10.1007/s10107-016-1067-6
ISSN0025-5610
Publisher versionhttp://link.springer.com/article/10.1007%2Fs10107-016-1067-6
Collections
Share: