The structure of liquid water beyond the first hydration shell 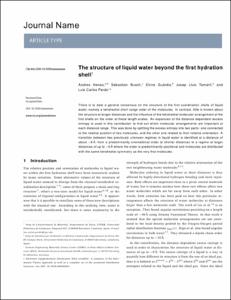 Document typeArticle
Rights accessOpen Access
Abstract
To date there is a general consensus on the structure of the first coordination shells of liquid water, namely tetrahedral short range order of molecules. In contrast, little is known about the structure at longer distances and the influence of the tetrahedral molecular arrangement of the first shells on the order at these length scales. An expansion of the distance dependent excess entropy is used in this contribution to find out which molecular arrangements are important at each distance range. This was done by splitting the excess entropy into two parts: one connected to the relative position of two molecules and the other one related to their relative orientation. A transition between two previously unknown regimes in liquid water is identified at a distance of about similar to 6 angstrom: from a predominantly orientational order at shorter distances to a regime at larger distances of up to similar to 9 angstrom where the order is predominantly positional and molecules are distributed with the same tetrahedral symmetry as the very first molecules.
CitationHenao, A., Busch, S., Guardia, E., Tamarit, J. Ll., Pardo, L. The structure of liquid water beyond the first hydration shell. "Physical chemistry chemical physics", 22 Juny 2016, vol. 18, p. 19420-19425.
URIhttp://hdl.handle.net/2117/90080
DOI10.1039/c6cp00720a
ISSN1463-9076
Publisher versionhttp://pubs.rsc.org/en/Content/ArticleLanding/2016/CP/C6CP00720A#!divAbstract
Collections
Share: