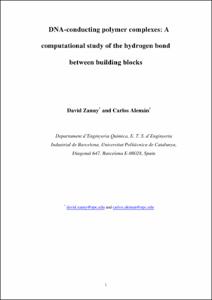 Document typeArticle
Rights accessOpen Access
Abstract
Ab initio quantum mechanical calculations at the MP2 level were used for an extensive study concerning the stability of hydrogen-bonded complexes formed by pyrrole and thiophene, which are the most common building blocks of conducting polymers, and DNA bases. Results indicated that very stable complexes were formed with pyrrole, which shows a clear tendency to form specific hydrogen-bonding interactions with nucleic acid bases. Furthermore, the strength of such interactions depends significantly on the base, growing in the following order: thymine < adenine ˜ cytosine < guanine. On the contrary, thiophene formed complexes stabilized by nonspecific interactions between the p-cloud of the ring and the N-H groups of the nucleic acid bases rather than specific hydrogen bonds. Overall, these results are fully consistent with experimental observations: polypyrrole is able not only to stabilize adducts with DNA but also to interact specifically, while the interactions of the latter with polythiophene and their derivatives are weaker and nonspecific. © 2008 American Chemical Society.
CitationZanuy, D., Aleman, C. DNA - Conducting polymer complexes: A computational study of the hydrogen bond between building blocks. "Journal of physical chemistry B", 2012, vol. 112, núm. 10, p. 3222-3230
URIhttp://hdl.handle.net/2117/90026
DOI10.1021/jp711010t
ISSN1520-6106
Publisher versionhttp://pubs.acs.org/doi/abs/10.1021/jp711010t
Collections
Share: