Bayesian estimation of the orthogonal decomposition of a contingency table 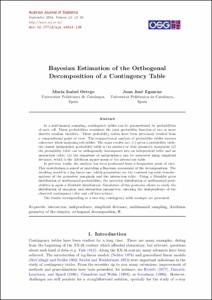 Except where otherwise noted, content on this work is licensed under a Creative Commons license : Attribution 3.0 Spain
Abstract
In a multinomial sampling, contingency tables can be parametrized by probabilities of each cell. These probabilities constitute the joint probability function of two or more discrete random variables. These probability tables have been previously studied from a compositional point of view. The compositional analysis of probability tables ensures coherence when analysing sub-tables. The main results are: (1) given a probability table, the closest independent probability table is the product of their geometric marginals; (2) the probability table can be orthogonally decomposed into an independent table and an interaction table; (3) the departure of independence can be measured using simplicial deviance, which is the Aitchison square norm of the interaction table. In previous works, the analysis has been performed from a frequentist point of view. This contribution is aimed at providing a Bayesian assessment of the decomposition. The resulting model is a log-linear one, which parameters are the centered log-ratio transformations of the geometric marginals and the interaction table. Using a Dirichlet prior distribution of multinomial probabilities, the posterior distribution of multinomial probabilities is again a Dirichlet distribution. Simulation of this posterior allows to study the distribution of marginal and interaction parameters, checking the independence of the observed contingency table and cell interactions. The results corresponding to a two-way contingency table example are presented.
CitationOrtego, M.I., Egozcue, J. J. Bayesian estimation of the orthogonal decomposition of a contingency table. "Austrian Journal of Statistics", 2016, vol. 45, núm. 4, p. 45-56.
URIhttp://hdl.handle.net/2117/89961
DOI10.17713/ajs.v45i4.136
ISSN1026-597X
Publisher versionhttp://www.ajs.or.at/index.php/ajs/article/view/vol45-4-3
Collections
Share: