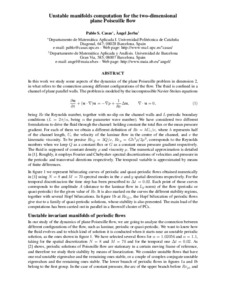 Except where otherwise noted, content on this work is licensed under a Creative Commons license : Attribution-NonCommercial-NoDerivs 2.5 Spain
Abstract
In this work we study some aspects of the dynamics of the plane Poiseuille problem in dimension 2, in what refers to the connection among different configurations of the flow. The fluid is confined in a channel of plane parallel walls. The problem is modeled by the incompressible Navier-Stokes equations ∂u ∂t + (u · ∇)u = −∇p + 1 Re ∆u, ∇ · u = 0, (1) being Re the Reynolds number, together with no-slip on the channel walls and L-periodic boundary conditions (L = 2π/α, being α the parameter wave number). We have considered two different formulations to drive the fluid through the channel: holding constant the total flux or the mean pressure gradient. For each of them we obtain a different definition of Re = hUc/ν, where h represents half of the channel length, Uc the velocity of the laminar flow in the centre of the channel, and ν the kinematic viscosity. To be precise ReQ = 3Q/ν, Rep = Gh3ρ/2µ2, corresponds to the Reynolds numbers when we keep Q as a constant flux or G as a constant mean pressure gradient respectively. The fluid is supposed of constant density ρ and viscosity µ. The numerical approximation is detailed in [1]. Roughly, it employs Fourier and Chebyshev spectral discretizations of velocities and pressure in the periodic and transversal directions respectively. The temporal variable is approximated by means of finite differences. In figure 1 we represent bifurcating curves of periodic and quasi-periodic flows obtained numerically in [1] using N = 8 and M = 70 spectral modes in the x and y spatial directions respectively. For the temporal discretizacion the time step has been prescribed to ∆t = 0.02. Each point of those curves corresponds to the amplitude A (distance to the laminar flow in L2-norm) of the flow (periodic or quasi-periodic) for the given value of Re. It is also marked on the curves the different stability regions, together with several Hopf bifurcations. In figure 1b at ReQ1, the Hopf bifurcation of periodic flows give rise to a family of quasi-periodic solutions, whose stability is also presented. The main load of the computations has been carried out in parallel in a Beowulf cluster of PCs.
URIhttp://hdl.handle.net/2117/899
Collections
Share: