Torsion and its interaction with other internal forces in EN 1993-1-1: a new approach 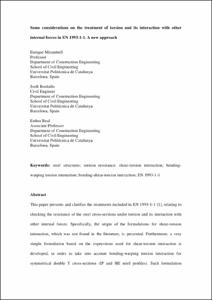