Fire as a primary event of accident domino sequences: The case of BLEVE 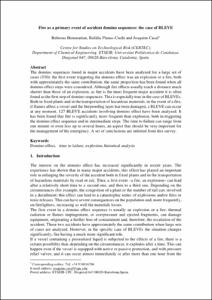 The domino sequences found in major accidents have been analyzed for a large set of cases (330); the first event triggering the domino effect was an explosion or a fire, both with approximately the same contribution; the same proportion has been found when all domino effect steps were considered. Although fire effects usually reach a distance much shorter than those of an explosion, as fire is the most frequent major accident it is often found as the first step of domino sequences. This is especially true in the case of BLEVEs. Both in fixed plants and in the transportation of hazardous materials, in the event of a fire, if flames affect a vessel and the fireproofing layer has been damaged, a BLEW can occur at any moment 127 BLEW accidents involving domino effect have been analyzed. It has been found that fire is significantly more frequent than explosion, both in triggering the domino effect sequence and in intermediate steps. The time to failure can range from 1 min or even less up to several hours, an aspect that should be very important for the management of the emergency. A set of conclusions are inferred from this survey. (C) 2015 Elsevier Ltd. All rights reserved.
CitationHemmatian, B., Planas, E., Casal, J. Fire as a primary event of accident domino sequences: The case of BLEVE. "Reliability engineering and system safety", 1 Juliol 2015, vol. 139, p. 141-148.
URIhttp://hdl.handle.net/2117/89838
DOI10.1016/j.ress.2015.03.021
ISSN0951-8320
Publisher versionhttp://www.sciencedirect.com/science/article/pii/S0951832015000873