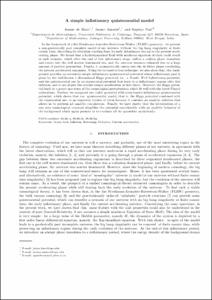 Pan, Supriya
Document typeArticle
Rights accessOpen Access
Abstract
In the framework of a flat Friedmann-Lemaitre-Robertson-Walker geometry, we present a nongeodesically past complete model of our Universe without the big bang singularity at finite cosmic time, describing its evolution starting from its early inflationary era up to the present accelerating phase. We found that a hydrodynamical fluid with nonlinear equation of state could result in such scenario, which after the end of this inflationary stage, suffers a sudden phase transition and enters into the stiff matter dominated era, and the Universe becomes reheated due to a huge amount of particle production. Finally, it asymptotically enters into the de Sitter phase concluding the present accelerated expansion. Using the reconstruction technique, we also show that this background provides an extremely simple inflationary quintessential potential whose inflationary part is given by the well-known 1-dimensional Higgs potential, i.e., a double well inflationary potential, and the quintessential one by an exponential potential that leads to a deflationary regime after this inflation, and it can depict the current cosmic acceleration at late times. Moreover the Higgs potential leads to a power spectrum of the cosmological perturbations which fit well with the latest Planck estimations. Further, we compared our viable potential with some known inflationary quintessential potential, which shows that our quintessential model, that is, the Higgs potential combined with the exponential one, is an improved version of them because it contains an analytic solution that allows us to perform all analytic calculations. Finally, we have shown that the introduction of a nonzero cosmological constant simplifies the potential considerably with an analytic behavior of the background which again permits us to evaluate all the quantities analytically.
CitationHaro, J., Amoros, J., Pan, S. Simple inflationary quintessential model. "PHYSICAL REVIEW D", 12 Abril 2016, vol. 93, núm. 8.
URIhttp://hdl.handle.net/2117/89829
DOI10.1103/PhysRevD.93.084018
ISSN2470-0010
Collections
Share: