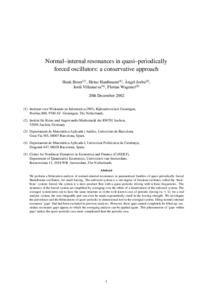 We perform a bifurcation analysis of normal–internal resonances in parametrised families of quasi–periodically forced Hamiltonian oscillators, for small forcing. The unforced system is a one degree of freedom oscillator, called the ‘backbone’ system; forced, the system is a skew–product flow with a quasi–periodic driving with basic frequencies. The dynamics of the forced system are simplified by averaging over the orbits of a linearisation of the unforced system. The averaged system turns out to have the same structure as in the well–known case of periodic forcing ; for a real analytic system, the non–integrable part can even be made exponentially small in the forcing strength. We investigate the persistence and the bifurcations of quasi–periodic –dimensional tori in the averaged system, filling normal–internal resonance ‘gaps’ that had been excluded in previous analyses. However, these gaps cannot completely be filled up: secondary resonance gaps appear, to which the averaging analysis can be applied again. This phenomenon of ‘gaps within gaps’ makes the quasi–periodic case more complicated than the periodic case.
URIhttp://hdl.handle.net/2117/897