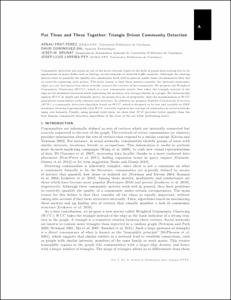 Document typeArticle
PublisherAssociation for Computing Machinery (ACM)
Rights accessOpen Access
All rights reserved. This work is protected by the corresponding intellectual and industrial property rights. Without prejudice to any existing legal exemptions, reproduction, distribution, public communication or transformation of this work are prohibited without permission of the copyright holder
ProjectCOMBINATORIA, TEORIA DE GRAFOS Y GEOMETRIA DISCRETA (MICINN-MTM2011-24097)
BENCHMARKING, APPLICATIONS AND TECHNOLOGY FOR GRAPH MANAGEMENT AND SOCIAL ANALYTICS (MINECO-TIN2013-47008-R)
Abstract
Community detection has arisen as one of the most relevant topics in the field of graph data mining due to its applications in many fields such as biology, social networks, or network traffic analysis. Although the existing metrics used to quantify the quality of a community work well in general, under some circumstances, they fail at correctly capturing such notion. The main reason is that these metrics consider the internal community edges as a set, but ignore how these actually connect the vertices of the community. We propose the Weighted Community Clustering (WCC), which is a new community metric that takes the triangle instead of the edge as the minimal structural motif indicating the presence of a strong relation in a graph. We theoretically analyse WCC in depth and formally prove, by means of a set of properties, that the maximization of WCC guarantees communities with cohesion and structure. In addition, we propose Scalable Community Detection (SCD), a community detection algorithm based on WCC, which is designed to be fast and scalable on SMP machines, showing experimentally that WCC correctly captures the concept of community in social networks using real datasets. Finally, using ground-truth data, we show that SCD provides better quality than the best disjoint community detection algorithms of the state of the art while performing faster.
CitationPrat, A., Domínguez, D., Brunat, Josep M., Larriba, J. Put three and three together: Triangle-driven community detection. "ACM transactions on knowledge discovery from data", 1 Febrer 2016, vol. 10, núm. 3, p. 22:1-22:42.
URIhttp://hdl.handle.net/2117/89696
DOI10.1145/2775108
ISSN1556-4681
Collections
Share: