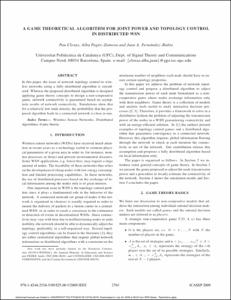 Document typeConference lecture
Rights accessOpen Access
Abstract
In this paper, the issue of network topology control in wireless networks using a fully distributed algorithm is considered. Whereas the proposed distributed algorithm is designed applying game theory concepts to design a non-cooperative game, network connectivity is guaranteed based on asymptotic results of network connectivity. Simulations show that for a relatively low node density, the probability that the proposed algorithm leads to a connected network is close to one.
CitationClosas, P.; Pages, A.; Fernandez, J. A Game Theoretical algorithm for joint power and topology control in distributed WSN. A: IEEE International Conference on Acoustics, Speech and Signal Processing 2009. "IEEE International Conference on Acoustics, Speech and Signal Processing 2009". Taipei: 2009, p. 2765-2768.
URIhttp://hdl.handle.net/2117/8963
DOI10.1109/ICASSP.2009.4960196
ISBN978-1-4244-2354-5
Collections
Share: