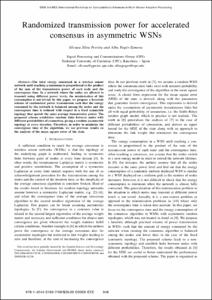 Document typeConference report
Rights accessOpen Access
Abstract
The total energy consumed in a wireless sensor network until reaching a consensus is proportional to the product of the sum of the transmission power of each node and the convergence time. In a network where the nodes are allowed to transmit using different power levels, the minimization of this consumption is not trivial. In this paper, we propose a heuristic scheme of randomized power transmission such that the energy consumed by the network is balanced among the nodes and the convergence time is reduced with respect to a fixed symmetric topology that spends the same average transmission power. The proposed scheme establishes random links between nodes with different probabilities of connection, giving a random asymmetric topology at every iteration. Therefore, in order to minimize the convergence time of the algorithm, we use previous results on the analysis of the mean square error of the state.
CitationSilva, S.; Pages, A. Randomized transmission power for accelerated consensus in asymmetric WSNs. A: IEEE International Workshop on Computational Advances in Multi-Sensor Adaptive Processing. "IEEE International Workshop on Computational Advances in Multi-Sensor Adaptive Processing". Aruba: 2009, p. 348-351.
URIhttp://hdl.handle.net/2117/8962
DOI10.1109/CAMSAP.2009.5413261
ISBN978-1-4244-5180-7
Publisher versionhttp://ieeexplore.ieee.org/search/srchabstract.jsp?tp=&arnumber=5413261&queryText%3Drandomized+transmission+power+for+accelerated%26openedRefinements%3D*%26searchField%3DSearch+All
Collections
Share: