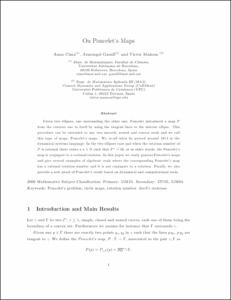 Document typeArticle
Rights accessOpen Access
All rights reserved. This work is protected by the corresponding intellectual and industrial property rights. Without prejudice to any existing legal exemptions, reproduction, distribution, public communication or transformation of this work are prohibited without permission of the copyright holder
Abstract
Given two ellipses, one surrounding the other one, Poncelet introduced a map P from the exterior one to itself by using the tangent lines to the interior ellipse. This procedure can be extended to any two smooth, nested and convex ovals and we call this type of maps, Poncelet’s maps. We recall what he proved around 1814 in the dynamical systems language: In the two ellipses case and when the rotation number of P is rational there exists a n ∈ N such that Pn = Id, or in other words, the Poncelet’s map is conjugate to a rational rotation. In this paper we study general Poncelet’s maps and give several examples of algebraic ovals where the corresponding Poncelet’s map has a rational rotation number and it is not conjugate to a rotation. Finally, we also provide a new proof of Poncelet’s result based on dynamical and computational tools.
CitationCima, A.; Gasull, A.; Mañosa, V. On Poncelet's maps. "Computers and mathematics with applications", 08 Agost 2010, vol. 60, núm. 5, p. 1457-1464.
URIhttp://hdl.handle.net/2117/8960
DOI10.1016/j.camwa.2010.06.027
ISSN0898-1221
Publisher versionhttp://www.sciencedirect.com/science/journal/08981221
Collections
Share: