REMOTE SENSING EFFICIENCY FOR URBAN ANALYSIS OF MECCA AND SURROUNDS 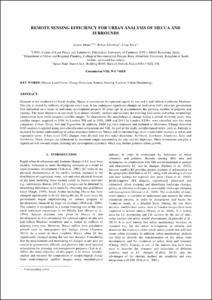 Situated in the southwest of Saudi Arabia, Mecca is considered the spiritual capital of one and a half billion worldwide Muslims. The city is visited by millions of pilgrims every year. It has undergone significant changes in land cover (LC) since the government first embarked on a series of ambitious development projects 20 years ago to accommodate the growing number of pilgrims and citizens. The main objective of our study is to detect, identify, analyze and measure the evolving land cover and urban morphology composition from multi-temporal satellite images. To characterize the morphological change during a period of twenty years, four satellite images, acquired in 1998 by Landsat TM and in 2003, 2008 and 2013 by Landsat ETM+, were classified into five main categories: Urban, Street, Soil and Vegetation. In addition, DEM has been extracted and included as Mountain. Change detection (CD) analysis is applied using post-classification comparison and GIS. As part of the study, morphological index, such as, Entropy is included for better understanding of urban structures behaviour. Mecca and its surroundings show a noticeable increase in urban and vegetation cover. Urban cover (UC) changes were divided into five radial directions: Northeast, Southeast, Southwest, East, and Northwest. These changes are influenced by mountain ranges surrounding the city and the highways. These revelations can play a significant role towards future planning and development activities, which may further promote urban growth.