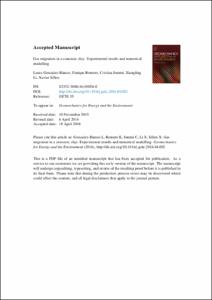 Gas migration through a potential host clay formation for the geological disposal of radioactive waste in Belgium is experimentally investigated in the laboratory, and numerical modelling is performed to help in the interpretation of the results. Selected air injection tests under oedometer conditions on initially saturated Boom Clay samples with oriented bedding planes are presented in the paper. Priority in the experimental programme was given to the study of the deformation response along the injection and dissipation stages, as well as to the analysis of the pore network changes, which detect the opening of fissures that can act as preferential air pathways. The experimental results were simulated using a fully coupled hydro-mechanical finite element code, which incorporates an embedded fracture permeability model to account for the simulation of the gas flow along preferential pathways. Clay intrinsic permeability and its retention curve were assumed to be dependent on strains through fracture aperture changes. The numerical results could reproduce upstream/downstream pressures, outflow volume and soil volume change accurately. The experimental results, combined with the numerical simulation, provide good insight into the role of the volumetric response and of the bedding planes on the air transport properties of Boom Clay samples, confirming that fracture aperture occurs during gas injection, which eventually dominates further injection and pressure release stages.
CitationGonzález Blanco, L., Romero, E., Jommi, C., Li, X.L., Sillen, X. Gas migration in a Cenozoic clay: experimental results and numerical modelling. "Geomechanics for energy and the environment", Juny 2016, vol. 6, p. 81-100.
URIhttp://hdl.handle.net/2117/89452
DOI10.1016/j.gete.2016.04.002
ISSN2352-3808
Publisher versionhttp://www.sciencedirect.com/science/article/pii/S2352380816300260