DSS from an RE perspective: A systematic mapping 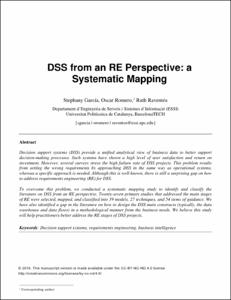 Document typeArticle
Rights accessOpen Access
Abstract
Decision support systems (DSS) provide a unified analytical view of business data to better support decision-making processes. Such systems have shown a high level of user satisfaction and return on investment. However, several surveys stress the high failure rate of DSS projects. This problem results from setting the wrong requirements by approaching DSS in the same way as operational systems, whereas a specific approach is needed. Although this is well-known, there is still a surprising gap on how to address requirements engineering (RE) for DSS.; To overcome this problem, we conducted a systematic mapping study to identify and classify the literature on DSS from an RE perspective. Twenty-seven primary studies that addressed the main stages of RE were selected, mapped, and classified into 39 models, 27 techniques, and 54 items of guidance. We have also identified a gap in the literature on how to design the DSS main constructs (typically, the data warehouse and data flows) in a methodological manner from the business needs. We believe this study will help practitioners better address the RE stages of DSS projects.
CitationGarcía, S., Romero, O., Raventós, R. DSS from an RE perspective: A systematic mapping. "Journal of systems and software", Juliol 2016, vol. 117, p. 488-507.
URIhttp://hdl.handle.net/2117/89442
DOI10.1016/j.jss.2016.03.046
ISSN0164-1212
Publisher versionhttp://www.sciencedirect.com/science/article/pii/S0164121216300061
Collections
Share: