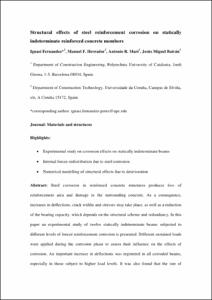 Steel corrosion in reinforced concrete structures produces loss of reinforcement area and damage in the surrounding concrete. As a consequence, increases in deflections, crack widths and stresses may take place, as well as a reduction of the bearing capacity, which depends on the structural scheme and redundancy. In this paper an experimental study of twelve statically indeterminate beams subjected to different levels of forced reinforcement corrosion is presented. Different sustained loads were applied during the corrosion phase to assess their influence on the effects of corrosion. An important increase in deflections was registered in all corroded beams, especially in those subject to higher load levels. It was also found that the rate of corrosion was affected by the load level. Internal forces redistributions due to induced damage were measured. Finally, the experimental results were compared with those predicted by a non-linear time-dependent segmental analysis model developed by the authors, obtaining in general good agreement.