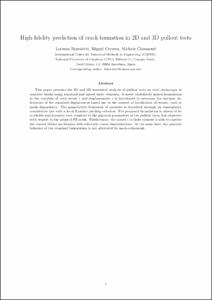 Document typeArticle
Rights accessOpen Access
Abstract
This paper presents the 2D and 3D numerical analysis of pullout tests on steel anchorages in concrete blocks using standard and mixed finite elements. A novel (stabilized) mixed formulation in the variables of total strain 8 and displacements u is introduced to overcome the intrinsic deficiencies of the standard displacement-based one in the context of localization of strains, such as mesh dependency. The quasi brittle behavior of concrete is described through an elastoplastic constitutive law with a local Rankine yielding criterion. The proposed formulation is shown to be a reliable and accurate tool, sensitive to the physical parameters of the pullout tests, but objective with respect to the adopted FE mesh. Furthermore, the mixed epsilon/u finite element is able to capture the correct failure mechanism with relatively coarse discretizations. At the same time, the spurious behavior of the standard formulation is not alleviated by mesh-refinement.
CitationBenedetti, L., Cervera, M., Chiumenti, M. High-fidelity prediction of crack formation in 2D and 3D pullout tests. "Computers & structures", Agost 2016, vol. 172, p. 93-109.
URIhttp://hdl.handle.net/2117/89423
DOI10.1016/j.compstruc.2016.05.001
ISSN0045-7949
Publisher versionhttp://www.sciencedirect.com/science/article/pii/S0045794916302243
Collections
Share: