A multivariate statistical model of extreme events: an application to the Catalan coast 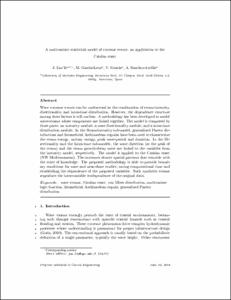 Document typeArticle
Rights accessOpen Access
Abstract
Wave extreme events can be understood as the combination of Storm-intensity, Directionality and Intra-time distribution. However, the dependence structure among these factors is still unclear. A methodology has been developed to model wave-storms whose components are linked together. The model is composed by three parts: an intensity module, a wave directionality module, and an intra-time distribution module. In the Storm-intensity sub-model, generalized Pareto distributions and hierarchical Archimedean copulas have been used to characterize the storm energy, unitary energy, peak wave-period and duration. In the Directionality and Intra-time sub-models, the wave direction (at the peak of the storm) and the storm growth–decay rates are linked to the variables from the intensity model, respectively. The model is applied to the Catalan coast (NW Mediterranean). The outcomes denote spatial patterns that coincide with the state of knowledge. The proposed methodology is able to provide boundary conditions for wave and near-shore studies, saving computational time and establishing the dependence of the proposed variables. Such synthetic storms reproduce the inter-variable co-dependence of the original data.
CitationLin-Ye, J., Garcia, M., Gracia, V., Sanchez-Arcilla, A. A multivariate statistical model of extreme events: an application to the Catalan coast. "Coastal engineering", Novembre 2016, vol. 117, p. 138-156.
URIhttp://hdl.handle.net/2117/89393
DOI10.1016/j.coastaleng.2016.08.002
ISSN0378-3839
Publisher versionhttp://www.sciencedirect.com/science/article/pii/S0378383916301661
Collections
Share: