A modal-spectral model for flanking transmissions 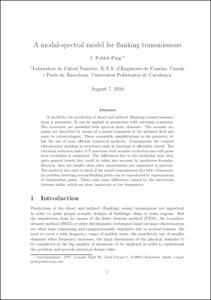 Except where otherwise noted, content on this work is licensed under a Creative Commons license : Attribution-NonCommercial-NoDerivs 3.0 Spain
Abstract
A model for the prediction of direct and indirect (flanking) sound transmissions is presented. It can be applied to geometries with extrusion symmetry. The structures are modelled with spectral finite elements. The acoustic domains are described by means of a modal expansion of the pressure field and must be cuboid-shaped. These reasonable simplifications in the geometry allow the use of more efficient numerical methods. Consequently the coupled vibroacoustic problem in structures such as junctions is efficiently solved. The vibration reduction index of T-junctions with acoustic excitation and with point force excitation is compared. The differences due to the excitation type obey quite general trends that could be taken into account by prediction formulas. However, they are smaller than other uncertainties not considered in practice. The model is also used to check if the sound transmissions of a fully vibroacoustic problem involving several flanking paths can be reproduced by superposition of independent paths. There exist some differences caused by the interaction between paths, which are more important at low frequencies.
CitationPoblet-Puig, J. A modal-spectral model for flanking transmissions. "Journal of sound and vibration", Novembre 2016, vol. 382, p. 238-257.
URIhttp://hdl.handle.net/2117/89390
DOI10.1016/j.jsv.2016.07.010
ISSN0022-460X
Publisher versionhttp://www.sciencedirect.com/science/article/pii/S0022460X16303194
Collections
Share: