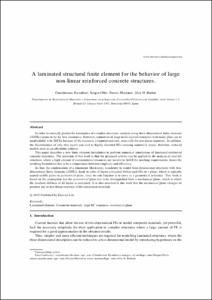 Document typeArticle
Rights accessOpen Access
ProjectCOMP-DES-MAT - Advanced tools for computational design of engineering materials (EC-FP7-320815)
Abstract
In order to correctly predict the kinematics of complex structures, analysis using three-dimensional finite elements (3DFEs) seems to be the best alternative. However, simulation of large multi-layered structures with many plies can be unaffordable with 3DFEs because of the excessive computational cost, especially for non-linear materials. In addition, the discretization of very thin layers can lead to highly distorted FEs carrying numerical issues, therefore, reduced models arise as an affordable solution. This paper describes a new finite element formulation to perform numerical simulations of laminated reinforced concrete structures. The intention of this work is that the proposed scheme can be applied in the analysis of real-life structures where a high amount of computational resources are needed to fulfill the meshing requirements, hence the resulting formulation has to be a compromise between simplicity and efficiency. So that, the condensation of a dimension (thickness), mandatory to model three-dimensional structures with two-dimensional finite elements (2DFEs), leads to refer all layers contained within such FEs to a plane, which is typically named middle plane or geometrical plane, since its sole function is to serve as a geometrical reference. This work is based on the assumption that the geometrical plane has to be distinguished from a mechanical plane, which is where the resultant stiffness of all layers is contained. It is also assumed in this work that the mechanical plane changes its position due to non-linear response of the component materials.
CitationEscudero-Torres, C., Oller, S., Martinez, X., Barbat, A. H. A laminated structural finite element for the behavior of large non-linear reinforced concrete structures. "Finite elements in analysis and design", Octubre 2016, vol. 119, p. 78-94.
URIhttp://hdl.handle.net/2117/89389
DOI10.1016/j.finel.2016.06.001
ISSN0168-874X
Publisher versionhttp://www.sciencedirect.com/science/article/pii/S0168874X16300774
Collections
Share: