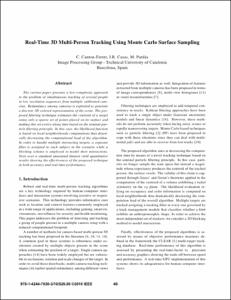 Document typeConference report
Rights accessOpen Access
Abstract
The current paper presents a low-complexity approach to the problem of simultaneous tracking of several people in low resolution sequences from multiple calibrated cameras. Redundancy among cameras is exploited to generate a discrete 3D colored representation of the scene. The proposed filtering technique estimates the centroid of a target using only a sparse set of points placed on its surface and making this set evolve along time based on the seminal particle filtering principle. In this case, the likelihood function is based on local neighborhoods computations thus drastically decreasing the computational load of the algorithm. In order to handle multiple interacting targets, a separate filter is assigned to each subject in the scenario while a blocking scheme is employed to model their interactions. Tests over a standard annotated dataset yield quantitative results showing the effectiveness of the proposed technique in both accuracy and real-time performance.
CitationCanton-Ferrer, C.; Casas, J.; Pardas, M. Real-time 3D multi-person tracking using Monte Carlo surface sampling. A: IEEE Computer-Society Conference on Computer Vision and Pattern Recognition Workshops. "2010 IEEE Computer Society Conference on Computer Vision and Pattern Recognition Workshops". San Francisco: 2010, p. 40-46.
URIhttp://hdl.handle.net/2117/8938
DOI10.1109/CVPRW.2010.5543734
ISBN978-1-4244-7030-3/10
Publisher versionhttp://ieeexplore.ieee.org/stamp/stamp.jsp?tp=&arnumber=5543734
Collections
Share: