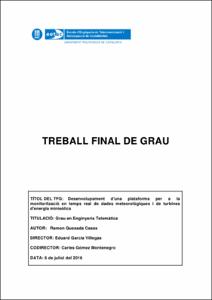 Document typeBachelor thesis
Rights accessOpen Access
Abstract
Wind power is establishing itself as one of the main sources of renewable energy. One of the project proposals in the scope of Smart City, in the collaboration framework between UPC's EETAC and the Viladecans' town hall, embraced precisely this topic. Researchers from UPC's department of Physics propose a study of the potential of small-scale wind power generation in Viladecans' area. In this context, the present final degree project focuses on designing the deployment of networked platforms to monitor real-time weather data (including wind speed) to ease the gathering of the data remotely. This project aims to describe the process of implementation of these platforms, detailing the main technologies involved and the scenarios to be covered, as well as estimating the budget needed for a possible real deployment of such mentioned scenarios. To do that, a Raspberry Pi with a Raspbian operating system has been used as the common core for these platforms to process and run the required software, along with a Wi-Fi radio interface to provide connectivity to these devices. To collect information on power generated by the turbines, the USB/IP technology has been used, in addition to the HOBOware Pro software, which is necessary to dump data from the Data Logger storing this information. Regarding the real time monitoring of meteorological data, 'pywws' has been used along with a series of custom made Python scripts to collect the measurements taken by an attached weather station and send and store them on a CKAN server to make them accessible via a web interface, following the Open data concept. The final platform achieved at the completion of this project has reached a functional prototype state. This prototype fully complies with the set of required functionalities posed by each scenario of interest.
SubjectsKnowledge management, Computer systems, Gestió del coneixement, Sistemes informàtics, Internet -- Aspectes socials
DegreeGRAU EN ENGINYERIA TELEMÀTICA (Pla 2009)
URIhttp://hdl.handle.net/2117/89359
Collections
Share: