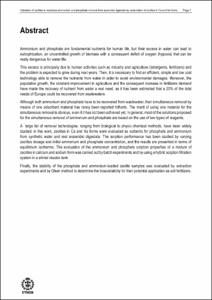 ; Manna, Luigi
Document typeMaster thesis (pre-Bologna period)
Rights accessOpen Access
Abstract
Ammonium and phosphate are fundamental nutrients for human life, but their excess in water can lead to eutrophication, an uncontrolled growth of biomass with a consequent deficit of oxygen (hypoxia) that can be really dangerous for water life. This excess is principally due to human activities such as industry and agriculture (detergents, fertilizers) and the problem is expected to grow during next years. Then, it is necessary to find an efficient, simple and low cost technology able to remove the nutrients from water in order to avoid environmental damages. Moreover, the population growth, the constant improvement in agriculture and the consequent increase in fertilizers demand have made the recovery of nutrient from water a real need, as it has been estimated that a 20% of the total needs of Europe could be recovered from wastewaters. Although both ammonium and phosphate have to be recovered from wastewater, their simultaneous removal by means of one adsorbent material has rarely been reported hitherto. The merit of using one material for the simultaneous removal is obvious, even if it has not been achieved yet. In general, most of the solutions proposed for the simultaneous removal of ammonium and phosphate are based on the use of two types of reagents. A large list of removal technologies, ranging from biological to physic-chemical methods, have been widely studied: in this work, zeolites in Ca and Na forms were evaluated as sorbents for phosphate and ammonium from synthetic water and real anaerobic digestate. The sorption performance has been studied by varying zeolites dosage and initial ammonium and phosphate concentration, and the results are presented in terms of equilibrium isotherms. The evaluation of the ammonium and phosphate sorption properties of a mixture of zeolites in calcium and sodium form was carried out by batch experiments and by using a hybrid sorption filtration system in a stirred reactor tank. Finally, the stability of the phosphate and ammonium-loaded zeolite samples was evaluated by extraction experiments and by Olsen method to determine the bioavailability for their potential application as soil fertilizers.
SubjectsSewage -- Purification, Aigua -- Depuració -- Tractament biològic, Zeolites, Aigües residuals -- Depuració -- Eliminació d'amoni, Aigües residuals -- Depuració -- Eliminació de fòsfor
URIhttp://hdl.handle.net/2117/89357
Collections
Share: